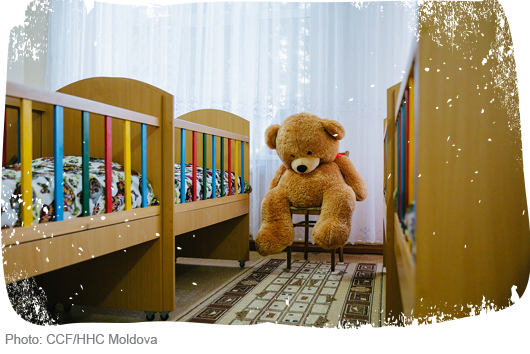 As you return to your families to celebrate Christmas, take a few minutes to consider this. Hundreds of thousands of children across Europe are growing up, away from their families, in institutional care.
END_OF_DOCUMENT_TOKEN_TO_BE_REPLACED Children are suffering in Greece. The new government wants to stop rising levels of child poverty. We are pleased to this commitment, but we call on the Greek Government not to lose sight of the needs of the most vulnerable in our societies.

There are too many children growing up in Greece separated from their biological families.

In Greece, many of those vulnerable families with children go unpaid or have had their jobs cut due to austerity measures. Poverty and deprivation can heighten the risk of violence and child abandonment.

When a child goes into care in Greece, more often than not they end up in institutional care. Often they stay there for the rest of their childhood. Other family-like alternatives such as foster care are poorly developed in Greece, lagging behind almost every country in Europe.

Guidelines exist from the UN and from the EU.  They should be used to make children’s rights a reality in Greece. The Roots Research Center – Opening Doors Coordinator in Greece – has been collaborating over the last 2 years with the Ministries of Welfare and Justice, on new legislation for children in institutions. Let’s not lose this momentum.

There are alternatives to institutional care. The most cost-effective solution is investing in an integrated child protection system that supports families in the local communities and offers individualised care for children. This means, for example, providing family and parenting support, community healthcare, quality education and training foster care professionals. The EU has made funding available for this purpose.

A good childhood is essential for a good society.  Let’s invest where it matters most.

END_OF_DOCUMENT_TOKEN_TO_BE_REPLACED Maria Herczog, coordinator of the Opening Doors campaign in Hungary and member of the UN Committee on the Rights of the Child, raises the alarm over Hungary’s failing child protection system. Despite strong legislation, a lack of resources, lack of training and deep-rooted prejudices in the system many children are still being institutionalized – a significant number of them are Roma.

Hungary has a legislation that prohibits placement of children in care for financial reasons. Still there is growing evidence that newborns are being taken into care from maternity wards, often denying the mothers any documented evidence of why and how such a decision has been taken.

The legislation clearly obliges the state to provide assistance to vulnerable families to prevent institutionalization of children, but there is no understanding of how these obligations are to be met, and no accompanying resources. Homelessness, inadequate housing conditions, and the inability of families to adequately clothe or feed their children are considered as parental neglect.  There is little if any attempt to help families improve their situation.  Although it is forbidden in Hungary to document the ethnic and religious background, anecdotal evidence suggests that babies of Roma origin are the most likely to be taken into care.

On 1 January 2014, a legislation came into force prohibiting the placement of any child under the age of 3 into infant homes – Hungary’s response to the growing pressure to deinstitutionalize and provide family-based alternatives.

Whilst in principle the legislation is to be welcomed, its implementation has, if anything, worsened the situation for children in care. Several infant homes still exist in the country, accommodating many infants and young children.

On the other hand, the pressure to increase the number of foster families has not been accompanied by adequate resources and training.  There are still too few foster families, and those that exist are often required to take on more children than they can cope with and are inadequately supervised.

There’s a high risk of abuse and neglect, with these children remaining largely under the radar of the child protection system. Given their budgetary constraints, local authorities cannot adequately fund child protection services and social workers are poorly paid.  Very often their jobs can be jeopardized if they actively advocate for the interest of the vulnerable families and children they are working with.

Maria Herczog is not the only one to voice concerns about this worrying situation. The Város Mindenkié, group for the homeless people, organised an event with the participation of experts, to raise awareness of the alarming situation of the growing number of homeless families, mothers with young children, whose children are placed into care because of homelessness, and TASZ – an NGO based in Budapest – has also raised concerns about a case of child institutionalisation.