Child and youth protection system in Spain is currently on the institutional care model, with alternative care, including community-based, family support and prevention services being underdeveloped. This situation persists despite the evidence that a protective family environment is crucial for a harmonious child’s development and that family-based care is more effective than institutional care in the long term. 1

Spain does not have a national strategic framework which contemplates a full transition from institutional to family- and community-based care. At best, deinstitutionalisation approach has been reflected in the National Health Strategy, however, it is not completely legally binding and varies depending on the region and competences of the autonomous region.2  The main challenges towards the realisation of deinstitutionalisation reform in Spain are the lack of resources at both national and regional level, the lack of clarity on the roadmap to implement the reform and the differences between the regions across Spain.

Thanks to legislative changes to the Organic Law 1/96, modified by the Organic Law 5/2015 and Law 26/2015, 5/2000 and Laws of Autonomous Communities, there has been a considerable progress achieved in ensuring and promoting children’s rights. The new legislation requires that the best interests of the child be the guiding principle for public authorities and be given priority in the legal system. Its objective is to strengthen child protection in the situations of domestic violence, sexual abuse and mistreatment. The Law emphasizes the need to care for the most vulnerable groups such as migrant children or children with disabilities, thus, recognizing the same rights and access to social benefits. The new legislation also introduces participation of children in the decisions that influence their lives, as well as a personal plan for each child 2 years before they transition from public care to independent living.

However, in 2014, there were approximately 32,682 children in alternative care in Spain, of whom 13,562 (41%) were children in residential care. This number does not include children with disabilities and children in migration. In Spain, the majority of residential care facilities are run primarily by NGOs, and there is no capacity limit of children per setting: the numbers vary depending on the local community. Institutions for children in Spain mainly house adolescents with behavioural problems until they reintegrate with their families. Out of 19,120 children in family-based care, 70.5% are placed in kinship families. All children under the age of 6 are placed directly in family-based care in Spain.

In the recent years, national and regional child protection systems have been particularly challenged due to the influx of unaccompanied migrant children. Children in migration remained a high priority for child protection authorities in 2018 in Spain, with the official number of children totaling to 7,6543.  According to 2017 Statistical Data Bulletin, unaccompanied children in most autonomous communities are mainly cared for in residential centers (1,774 cases in 2015), with only 166 children being placed in family-based care.  There are also noticeably more boys than girls (86.4% / 13.6%).

The residential care settings for children do not respond to children’s needs and their assistance is very limited due to the lack of national legal guidance and considerable financial constraints. Currently, each autonomous community provide support to children in migration based on their available resources.  A new legislation regulating provision of care and services for unaccompanied children has been expected, but civil society in Spain has no information on its progress at the moment.

The Asylum Migration and Integration Fund (AMIF) has supported several integration projects for unaccompanied children in Spain. The main focus is to support more job creation for professionals that will support children in migration. Moreover, research pilot projects that asses the causes for immigration and encourage social cohesion in countries of origin received financial support from AMIF in Spain. However, financial sustainability for the majority of these pilot projects is a challenge and the continuation of these services after the end of EU funding is not guaranteed.

Take measures to ensure that EU funds, especially the ones directed for children in migration, are linked to the national policy frameworks

In Spain the campaign is coordinated by: In Spain the campaign is supported by:

Spain advocates for a change of the care model for children

FEDAIA (the Federation of Care and Education Institutions for Children and Adolescents) – Opening Doors national partner in Spain – calls to move towards a community-based model of care for children and young people. This and other aspects of the new paradigm have been discussed at the last in a series of four seminars that […]

END_OF_DOCUMENT_TOKEN_TO_BE_REPLACED 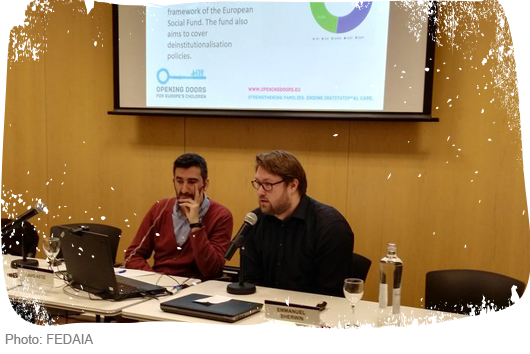 From institutions to community: Spain reflects on the model of care for children

Changing the model of care provision for vulnerable children from an institutional care model to a community model is the aim of a series of seminars organised by FEDAIA, the Federation of Care and Education Institutions for Children and Adolescents in Catalonia, Spain. Three seminars and a technical meeting under the title “Cycle Tribuna FEDAIA […]

END_OF_DOCUMENT_TOKEN_TO_BE_REPLACED 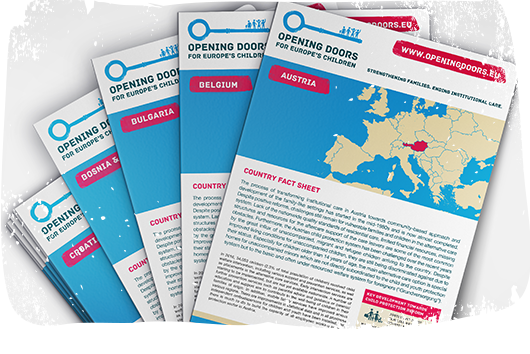 The Opening Doors for Europe’s Children – a pan-European campaign advocating for strengthening families and ending institutional care – released the 2017 country fact sheets which document steady progress towards deinstitutionalisation (DI) in 16 European countries. However, policy commitments and money should be channelled more efficiently into families and communities, and not institutions, country snapshots reveal. Through […]